If I could only keep one cookbook, it would be the JOY OF COOKING .. the JOY of finding the perfect recipe for a flaky pie crust!

Amazing to have a cookbook published in 1936 endure eight different revisions and still be the go to cookbook over 80 years  later.  Makes me believe that “Grandma’s” pie dough recipe must have come from this same cookbook!

Pie dough seems to be a challenge for most cooks including bakers.  We tend to shy away from making a crust from scratch as it will be too tough, or like cement.   Technique will take a few times to achieve a flaky crust .. but who doesn’t mind some extra pie after dinner for dessert.

Tips from the Pro:

This cookbook also has an amazing reference section, know your ingredients, featuring equivalents and conversions of measurements.

Once I had finished making my pie dough,  I decided to go with a classic apple crumble, adding in some cranberries for colour, using a single crust, topping with a oat crumble. 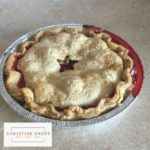 A winning recipe for a super Super Bowl party!

Hollywood may be coming to your street corner